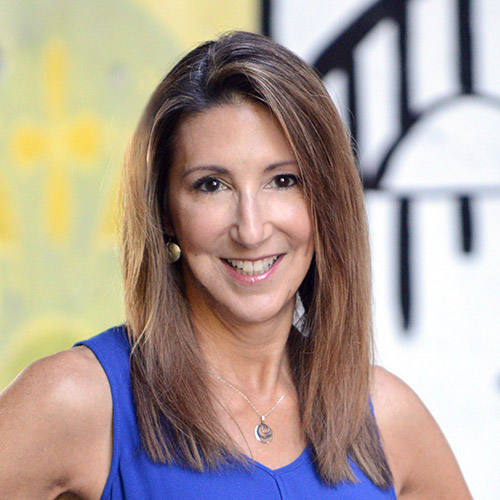 Sharon L. Goldmacher is a veteran in the marketing and public relations industry, beginning her career in Atlanta in 1987. She develops integrated, results-focused marketing, PR and digital campaigns for clients in real estate, community improvement districts, food/beverage, professional services, sports, nonprofits and technology.

Competitive by nature, she created communications 21 in 1992, at the naïve age of 28, to see if she could do it. Within the first two years, she won the DeKalb Chamber’s Stargazer award for “Small Business Start-Up of the Year” and the Young Advertising Professional Award presented by the Atlanta Ad Club. In 2013, she won Business to Business Magazine’s Woman of Excellence award. Over the next 25 years, the company has garnered 80 awards for its award-winning campaigns.

While often accused of telling long stories, Sharon enjoys presenting and has spoken on marketing, PR and digital strategies and tactics to various organizations such as the Association of Public Gardens, the American Marketing Association’s Annual Summit, the Exhibit Design and Producers Association, NewComm (Society for New Communications Research conference), MBA Conclave Curriculum and Teaching Conference, PRSA chapters in Washington, D.C., and Florida and more.

Corporate responsibility is part of c21’s company culture, and Sharon volunteers on a number of industry and community boards, including the Atlanta Convention & Visitors Bureau, the past presidents’ council of the American Marketing Association – Atlanta Chapter, the Hospitality Business Network Foundation and The Blue Horse Association. In addition, she volunteered for Georgia Support The Vote, a nonpartisan organization focused on helping businesses to inform, encourage and enable their employees to vote.  She is a graduate of Leadership Buckhead, and served on the board for several years, in addition to holding volunteer positions with the Green Chamber of the South, Literacy Volunteers of America and Hands On Atlanta. Sharon also served as the executive director of the Atlanta Local Organizing Committee for the planning and execution of the 2013 NCAA® Men’s Final Four® held in Atlanta.

While a love-hate relationship, golf is a passion, and her favorite golf saying is “fairway-play is for sissies.” In the past few years, she’s taken up cycling, and can be found on the Silver Comet Trail or huffing and puffing around the hills in her neighborhood!