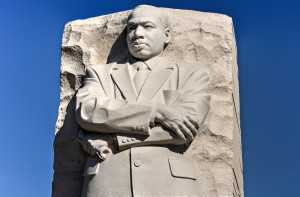 “An individual has not started living until he can rise above the narrow confines of his individualistic concerns to the broader concerns of all humanity.”

Each year in January, our nation commemorates Dr. Martin Luther King, Jr, one of the nation’s most celebrated activists and leaders. It’s the day that his contributions to peace and human equality are most fully acknowledged.

Before writing this post, I did some research on Dr. King, his life and his work for the African American Civil Rights Movement. Most of what I read were just reinforcements—revisiting what I’d already learned and studied in school. But I also became interested in what other people said about him.

I noticed one word in particular that was in nearly every article I read about Dr. King: leader.

Dr. Martin Luther King, Jr. continues to be the epitome of leadership, evoking words such as courageous, dedicated, persistent and influential. He was also effectively persuasive, proven by the impact of his legendary “I Have a Dream” speech, which still continues to resonate with individuals today.

There is something to be learned about leadership from Dr. King.

It’s not just one thing that makes a leader: it’s a combination of traits that all complement each other. It takes time to build these traits; they need to be developed and nourished. There are numerous local groups and organizations that recognize the importance in grooming individuals to be leaders, such as Leadership Buckhead; an organization dedicated to developing leaders from the inside out, and Leadership Atlanta.

Dr. King was one of the most influential leaders of all time, not just of the African-American Civil Rights Movement, but of this nation. To this day, his leadership qualities continue to inspire everyone from religious and political leaders, to young students who are just beginning to learn about his life and his life’s work.

Martin Luther King, Jr. was a visionary who worked tirelessly and nobly to ensure that his dream would one day be realized.

January 20 isn’t the only time to learn about Dr. Martin Luther King, Jr; the King Center is right here in Atlanta, in c21’s backyard, in fact! It’s always a great time to learn more about one of history’s greatest leaders. Learn more about visiting this national park and center.

Brittany Knox is the newest public relations intern here at c21. She is an alumna of Georgia State University, where she received her Bachelor of Arts in Communications. When she’s not sharpening her skills as a future PR maven, Brittany enjoys traveling, dancing, and dining around Atlanta.