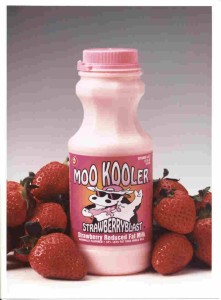 Challenge
American children are not drinking enough milk. In order to combat this calcium crisis, The Dairy Council Mid East, a nonprofit organization, planned to introduce a new kid-friendly milk drink, called Moo Kooler™ to the market. The eventual goal was to sell the product to a dairy processing company. The organization had never created or launched a consumer product before and Moo Kooler™ would only be available in three cities in the Midwest during the initial phase.

Solution
c21’s research showed that new milk products were considered to be the most underdeveloped category in the beverage industry, and as a result, at the time, there was limited competition. c21 recommended executing a national publicity launch in order to drive product demand.

We developed and sent a direct mail teaser campaign and created two media kits – one targeted to consumer publications, and the other to trade media. Following the teaser, we arranged product and press kit deliveries.

Results
We placed more than 20 stories about Moo Kooler™ in print publications such as Newsweek, Working Mother, Los Angeles Times, the Wall Street Journal, USA Today and numerous trade publications. In addition, we obtained three appearances on The Today Show, an on-air taste test by two CNN anchors and placements on numerous regional broadcast outlets. We reached more than 10 million consumers with information about Moo Kooler™, with an advertising value equivalent to almost $70,000.