Challenge
Gwinnett Place Community Improvement District (GPCID), a self-taxing district that uses additional commercial property taxes to accelerate infrastructure improvements, was looking to highlight redevelopment opportunities in its district – with the goal of creating a more walkable, accessible urban community. One glaring issue happens to be a “dead mall” in the district, which has led to negative perceptions in the area. GPCID asked c21 to create a campaign to market three key catalyst sites that were ripe for redevelopment, and also reposition the area in a more positive light.

Solution
c21® created a detailed, year-long plan called Vision 2020 designed to attract developers to consider redevelopment in the area. The plan included developing and cultivating a list of more than 70 developers in Atlanta, the Southeast and country and marketing the area with an integrated communications strategy 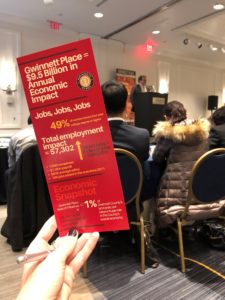 Results
The Vision 2020 campaign concluded in November 2018 and successfully repositioned the area as the County’s commercial core, generating billions to the economy. Social media efforts resulted in more than 100,000 impressions and drove 800 website clicks, the video produced 2,500 views, publicity resulted in 10 million media impressions and the email drip campaign had a 32% open rate and average 7% CTR, well above industry standards.

As part of the efforts, GPCID met with more 15 development companies, including a developer that purchased property at Gwinnett Place Mall with the goal of redevelopment into a mixed-use community, and Gwinnett County purchased land to expand a transit center showing confidence in the area’s growth.