Atlanta hosted the 75th celebration of the NCAA® Men’s Final Four® in 2013. communications 21 planned, executed and marketed the world’s second most popular sporting event. c21 President Sharon Goldmacher was hired as the executive director of the Atlanta Local Organization Committee, and the agency was responsible for media relations, grassroots and event marketing as well as interactive tactics, including a local website and social media management and engagement to drive attendance to Final Four weekend.

Make 2013 – the tournament’s 75th anniversary year – the best the NCAA Men’s Final Four ever. While tickets to the game are usually sold out a year in advance, c21’s job was to increase attendance to the events surrounding the games.  The previous year’s tournament in New Orleans had big numbers to beat: 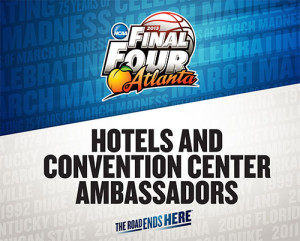 For the first time ever, the NCAA decided to hold the Division II and Division III national championship games that same weekend, as part of the anniversary celebration, in the Final Four host city. c21’s research indicated typical attendance for the DII and DIII championship games was ~1,500 – 2,000. Seating capacity for 2013 venue was 10,000. Ultimately, we needed to ensure the student-athletes did not play in an empty arena, and had a true Final Four experience. The final challenges were the launch and adoption of the NCAA’s first mobile app, and the creation and management of the first hyper-local social media campaign owned by the organizing committee.

c21 developed the NCAA’s first integrated marketing PR and interactive communications plan that would use a hyper-local website, custom social media platforms, grassroots and email marketing, media relations, contests, promotions and event collateral to build awareness and buzz leading up to the Final Four, generate ticket sales for Bracket Town, registration for events like clinics and 3 vs. 3 games, and ultimately drive traffic to all of the weekend’s ancillary events.
We created and distributed nearly 30 press releases and media alerts leading up to the event, held a 75-days out press conference in January to honor the 75th Celebration of March Madness and a press conference to kick-off Final Four weekend. We worked closely with bloggers as well as traditional media for 18 months.

Grassroots marketing consisted of working with non-profits and faith-based organizations to promote the free and low-cost events surrounding the weekend in order to drive family attendance.  The heart of the campaign relied on online marketing. We launched a website (final4atlanta.com), Facebook and Twitter and posted monthly, increasing to multiple times daily as March Madness and the event approached. We partnered with the host institution, Georgia Tech, the Georgia World Congress Center Authority, Philips Arena, the Atlanta Convention & Visitors Bureau (ACVB) and more to cross-promote online, and worked with local social media influencers, including Catlanta (~5,000+ followers and ~6,000 likes), who created custom Final Four Atlanta art pieces for people to find during the weekend, and 11Alive (facebook.com/11Alive) on a contest to win Final Four game tickets. We launched an email marketing campaign, with daily emails that provided a sneak peek at the next day’s events to those who had registered on the local site. 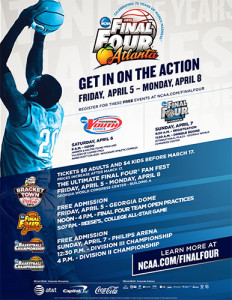 Nearly 150,000 people attended the Final Four games – making it the highest Final Four attendance to date [Dallas in 2014 surpassed Atlanta’s attendance]. More than 100,000 visitors came to Atlanta, and the economic impact was measured at $110 million (it was ~$50 million when Atlanta last hosted in 2007).

Media relations resulted in 136 stories about Final Four in Atlanta totaling 97,162,830 impressions and $755,805 in corresponding advertising equivalency. We distributed more than 20,000 pieces of collateral, and pre-sold more than 6,000 tickets to the fan festival event Bracket Town – an NCAA first.

In six months, Twitter @FinalFour (twitter.com/finalfour) garnered 4,025 followers. The Final Four Atlanta Facebook page (facebook.com/finalfouratlanta) garnered 6,849 fans. Facebook interactions grew from only 88 in January to over 8,700 in April, and the contests we ran on Twitter garnered 2,000 entries. The website peaked with ~40,000 total visits in April, and Facebook ads resulted in 646,586 in total reach, 4,321 clicks and 1,870 new likes for just over $1,500. The mobile app was downloaded 25,000 times, exceeding the NCAA’s goal of 20,000 downloads.

The email marketing campaigns doubled national industry standards (as reported by emailstatcenter.com) with an average open rate of 50.53 percent (vs. 23.3 percent) and an average click-through rate of 10.8 percent (vs. 5.9 percent). The chart illustrates all attendance figures, and we broke all event records by any other Final Four. Local Atlantans’ participation was measured at 25% through the economic impact study.

“You and your team did an awesome job, and it was fun and enjoyable working with you. The Golden Flame Award will be proudly displayed in our offices as a reminder of a special and historic Final Four celebrating 75 years of March Madness.”
-Dan Gavitt, vice president of Men’s Basketball Championships