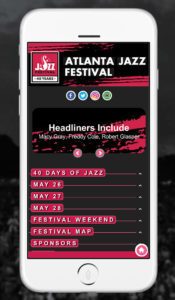 Challenge
The Atlanta Jazz Festival’s website was not mobile friendly, so attendees had a difficult time viewing Festival information on their mobile phones when they were actually at the Festival site in Atlanta’s Piedmont Park. In case of a line-up change, the website also would be difficult to update quickly. Additionally, the City of Atlanta Mayor’s Office of Cultural Affairs (OCA) was spending hundreds of dollars on printed line-up schedules for Festival attendees.

Along with the line-up being easily accessible from Festival-goers’ mobile phones, the annual Atlanta Jazz Festival survey also was available with one tap from the mobile channel, meaning the OCA could cut back on printing costs for the surveys, along with the printed artist line-up programs.

In 2017, c21 won awards from both PRSA Georgia Chapter and IABC Atlanta for our work creating and implementing the Atlanta Jazz Festival mobile channel.